Aurora
Connect and communicate with your devices anywhere in the world.

Aurora is the world’s first satellite phone terminal to provide satellite voice, data, and GPS tracking via WiFi to smartphones, tablets, PCs and other devices.

With Aurora your smartphone is your satellite phone. The Aurora gives you the power of the Iridium satellite network with the devices you already use – your smartphone, tablet, or computer. Make a satellite call from your iPhone or Android device. Check email and download weather files over WiFi. Share your location with others. With Aurora it’s done. Aurora is VoIP voice calls, data, and tracking all in one. Anywhere in the world.

Aurora is a fully contained terminal with no below-decks equipment needed. There is no need for a docking station, coax cable, or any other accessories. Aurora is powered by a single Ethernet cable for easy, fast, and efficient installtion. Aurora is built to be the most convenient communications solution for the most extreme places on Earth.

The Aurora comes preconfigured for satellite VoIP voice calls over the Iridium network. Just download the free XGate Phone app to your iOS or Android mobile device and talk on your smartphone using your Iridium satellite airtime.

Your phone will connect via WiFi VoIP to the Aurora and Aurora translates the calls into standard satellite voice calls over Iridium so you can use standard Iridium prepaid or postpaid airtime.

The Aurora has clear voice quality and minimizes dropped calls because of its strong external antenna.

Aurora is the world’s first satellite phone terminal to provide satellite voice, data, and GPS tracking via WiFi to smartphones and tablets

Onboard Network with Multiple Phone Lines

Up to 4 phone lines can speak to one-another over the local network created by Aurora, giving you a complete local phone system with extension, voicemail, and ringing options. All free, included with Aurora.

Because Aurora uses VoIP over local WiFi, none of the calls made over the local network consume airtime. This means that a captain can call the kitchen, one room can call another, and you can check in with your guests – all at the same time. All free.

Aurora is compatible not only with XGate Phone for phone calls over WiFi using the smartphone in your pocket, but you can also use Ethernet phones and SIP WiFi phones to make satellite phone calls over Aurora.

With Aurora you can track your ship (or other asset, like a vehicle) at pre-determined intervals. That information can be loaded onto an individualized webpage with real-time tracking information so family and friends can see where you are.

Aurora special compression technology and advanced GPS engineering allow for the quick transmission of small bits of data (like GPS pings) at a fraction of the airtime cost of most satellite phones and terminals.

Aurora is a NMEA 2000 compliant GPS WiFi repeater – so you can share Aurora’s GPS data with virtually any of the marine electronics on your vessel – in real time. Want to steer your boat with an iPad? With Aurora you can. The GPS capabilities of this technology are so advanced that many Aurora users simply pilot their boats with the detailed information on their iPad app rather than use traditional GPS.

With Aurora, you get all that capability in one single unit, for less money than you would spend on a comparable full handheld satellite phone setup.

Aurora is perfect for land-based military base-camps or communication centers requiring satellite communications. Aurora can handle up to 4 concurrent phone calls over its local network, so leaders can speak with their teams right over the Aurora – without using any satellite airtime. 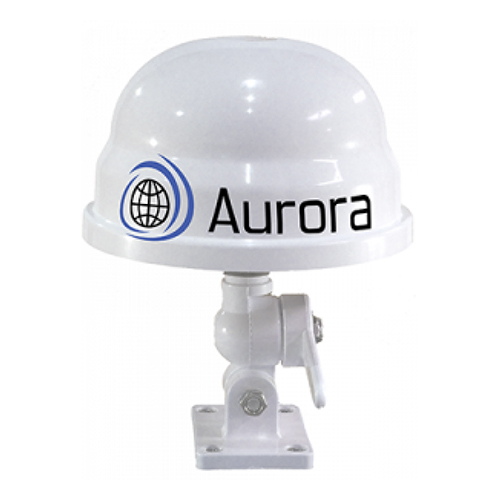