Abbreviated from American Standard Code for Information Interchange, is a character-encoding scheme. Originally based on the English alphabet, it encodes 128 specified characters into 7-bit binary integers as shown by the ASCII chart on the right. The characters encoded are numbers 0 to 9, lowercase letters a to z, uppercase letters A to Z, basic punctuation symbols, control codes that originated with Teletype machines, and a space. For example, lowercase j would become binary 1101010 and decimal 106. ASCII codes represent text in computers, communications equipment, and other devices that use text. Most modern character-encoding schemes are based on ASCII, though they support many additional characters. 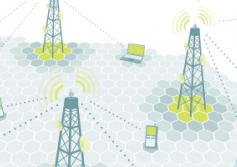 You might be surprised at the how differently satellite and GSM terminals operate to remain competitive on airtime. There are applications where the airtime costs are identical to GSM solutions, which are regarded as the lowest cost solution in the industry. Hardware pricing is still more expensive than GSM solutions simply based on the complexity, volume of terminals, and transmission distance and power to the satellite. This does have an...
More